In three London properties belonging to its open-ended real estate fund hausInvest Commerz Real has concluded or extended new lease agreements with restaurateurs for a total of approx. 1,400 square metres.

In the office building “180 Great Portland Street” between Oxford Street and Lords cricket ground, the cricket bar “Sixes” has opened its second venue in London, the “Fitzrovia Clubhouse”. On just less than 800 square metres it accommodates a bar, cricket simulators and a restaurant section in the building next door. A further 700 square metres of office space in the property, which had been acquired in 2008, are currently under offer. 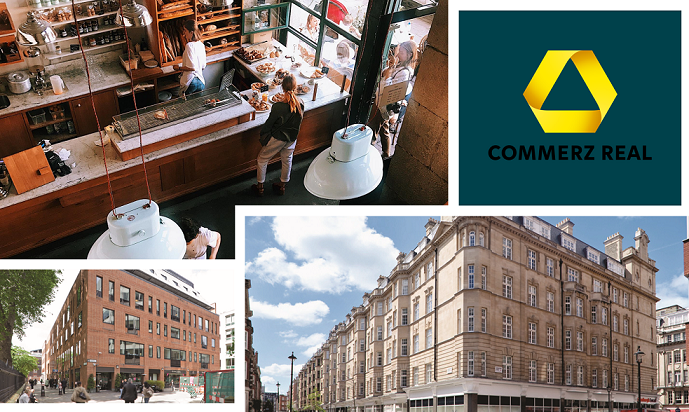 In “Paternoster Square” a coffee shop has extended its current lease agreement. The Dion Wine Bar in the neighbouring “Paternoster House”, a popular meeting point in the city with a bar and restaurant, as well as a generously proportioned outdoor area, has extended its lease agreement for 400 square metres through to 2029. Both gastronomy concepts profit from the central location in the immediate vicinity of the London Stock Exchange with a view of St. Paul's Cathedral, which is directly opposite. “Paternoster Square” and “Paternoster House” have been in the portfolio of hausInvest since 2001. At present a further 170 square metres of retail and gastronomy space, which can be split into two units, are available in “Paternoster House”, as well as a further 1,000 square metres of office space plus parking space. Commerz Real is currently refurbishing the building with a new bike storage, improved access routes throughout the building, an upgraded new reception, as well as newly build wellness areas with showers and changing rooms.