Commerz Real has acquired a hotel and boarding house complex from the “Star Inn” brand which is still to be erected in Heidelberg. The property with a total lettable area of approx. 14,600 square metres is centrally located in the proximity of the main railway station (Speyerer Straße 9), and following its completion in the first half of 2018 is to have a total of approx. 300 rooms, thereof 215 in the hotel, and 94 parking spaces. A lease agreement for 20 years plus an extension option of two times five years has been concluded with the German subsidiary of Austria’s Star Inn Hotels group. The seller is a joint venture between S.I.E. Soini Immobilienentwicklung, a project developer domiciled in Ottobrunn, and the Hamburg-based family office Peter Möhrle Holding. Following erection by the civil engineering firm Peter Gross Hoch- und Tiefbau, St. Ingbert, Commerz Real will include the hotel in its open-ended real estate fund hausInvest. 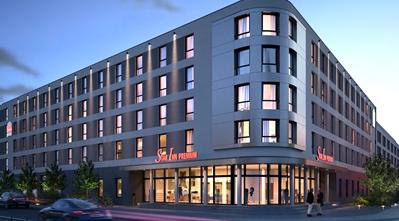 “Heidelberg is both an established tourist destination and a burgeoning congress location,” explains Robert Bambach, the board member at Commerz Real responsible for Real Estate Transactions.“The combination of a premium hotel and boarding house not only satisfies local demand in an excellent manner, but also contributes to the diversification of our portfolio.”According to the international market research institute STR Global, the revenue per room in Heidelberg in 2015 was 91.63 euros. This is 10.9 per cent higher than in the previous year, with only Cologne and Munich Airport posting higher growth rates. With this average daily rate the university city on the river Neckar takes second place throughout Germany behind Frankfurt am Main (ca. 127 euros).“Both cities are characterised by a high proportion of international guests, something which has a positive impact on the average daily rate,”says Bambach. The design-oriented hotel will have an up-market construction and fit-out quality, thus specifically consolidating the middle-class segment in the fund’s hotel portfolio.

The lessee Star Inn Hotels Deutschland is part of the Garai Holding, founded in 2004 by the Austrian Paul Garai, a former managing director of Accor. The group currently operates 16 hotels in Germany and Austria with approx. 2,200 rooms in the three star and three star premium segments. Three additional hotels with a total of approx. 500 rooms are currently under construction and will be opened through to 2018, including the complex in Heidelberg. Revenues for the heavily expanding company in Germany were approx. 15 million euros in 2015 and are set to grow to more than 100 million euros in the coming years. “We are already very much looking forward to our new hotel in Heidelberg and are pleased to have found a lessor in Commerz Real who is supporting and accompanying us in our development,”says Reiner Bauch, managing director of Star Inn Hotels Deutschland.“This first property is hopefully the beginning of a strong collaboration.”

The acquisition was structured by Commerz Real as an asset deal in the form of a forward funding transaction. This means that Commerz Real initially bought the plot of land with a construction obligation and then gradually pays for the property in accordance with construction progress.“In this manner we were able to secure this property at an early stage and at attractive conditions for our investors,”says Bambach. The contractual parties agreed to maintain confidentiality on the purchase price.