Commerz Real has acquired a portfolio with four residential complexes that are to be newly constructed from the project developer Quarterback Immobilien for its open-ended real estate fund Hausinvest: “Wohnen am Kulturgleis” in Dresden, “Wohnen am Mönchsberg” in Jena, as well as “Krystallpalast Areal” and “Eliseneck” in Leipzig. Following completion of the properties the portfolio will comprise some 650 apartments, a hotel with 282 rooms and approx. 20,000 square metres of commercial space. “This amounts to a significant expansion of the residential proportion in Hausinvest,” says the visibly pleased fund manager Mario Schüttauf. The off-market acquisition has been structured in the form of forward funding with an agreement that confidentiality be maintained regarding the purchase price. Commerz Real had already bought a construction project in Jena comprising six buildings with 114 apartments from Quarterback Immobilien in March 2021.

Dresden, Jena and Leipzig rank among Germany’s “swarm cities” as defined by the market research institute Empirica as long ago as 2015; such cities attract particularly large numbers of young people, with the effect that their birth cohorts double at the very least. “And the modern residential complexes and mixed-use quarters are all situated in very good locations, thus ensuring the fund sees low-risk rental income with long-term stability,” explains Schüttauf.

And the modern residential complexes and mixed-use quarters are all situated in very good locations, thus ensuring the fund sees low-risk rental income with long-term stability. 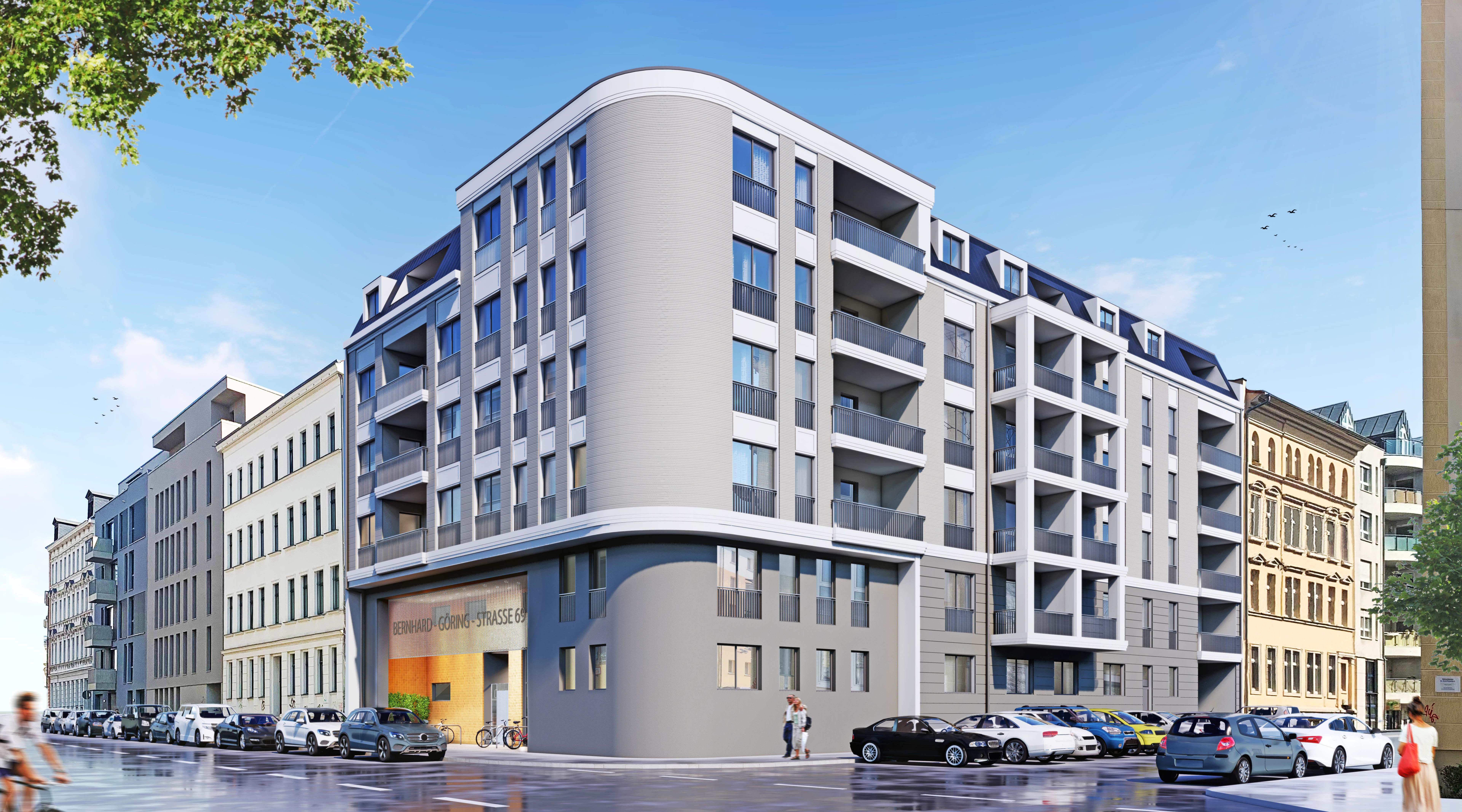 The “Wohnen am Kulturgleis” project in Dresden is being developed at Hansastrasse 8 in the city’s Neustadt district. Construction of 213 residential units, 44 of which are to be government-subsidised, and approx. 6,700 square metres of commercial space, is to commence there at the beginning of 2023. Completion is scheduled for 2025. In addition to office areas, retailers and gastronomy, the commercial space will also accommodate an historic train shed, a listed building covering an area of 1,600 square metres. Quarterback Immobilien and Commerz Real envisage this being used in a cultural capacity.

In Jena’s “Wohnen am Mönchsberg” district 174 residential units are being created through to 2025. These are located on Maria-Pawlowna-Strasse, and thus in the immediate vicinity of the “Naumburger Strasse” construction project which had already been acquired in March 2021.

With “Krystallpalast Areal” in Leipzig’s Brandenburger Strasse a mixed-use quarter with a 282-room hotel from “Me and all”, a boutique hotel brand of the Lindner Group, is being erected in the immediate vicinity of the main railway station. The project comprises 230 residential units, of which 44 are apartments for senior citizens, and 12,800 square metres of commercial space for office users, retailers and gastronomy. Also in Leipzig, at Körnerstrasse 35-37, the property “Eliseneck” with 36 apartments and 225 square metres of commercial space for retailers or gastronomy is to be erected by the end of 2023. Thanks to its location in the popular Südvorstadt district the property can be easily reached using local public transport, with direct connections to the city centre and the main railway station.

Three of the four residential complexes are to be erected pursuant to the new KfW 55 EE standard for energy-efficient houses and the use of renewable energy which has been in effect since June 2021. This prescribes that at least 55 per cent of the heating and cooling requirements of a building have to be supplied from renewable energy sources. The “Eliseneck” residential complex in Leipzig is being erected pursuant to the KfW 55 energy efficiency standard.

Commerz Real was advised on legal aspects of the transaction by Mayer Brown, on tax matters by PwC and on technical matters by SMV.